Here is the text of General von Trotha’s proclamation to the Herero people issued on October 2, 1904, translated by Jan-Bart Gewald:

I, the great General of the German troops, send this letter to the Herero people.

The Herero are no longer German subjects. They have murdered and stolen, they have cut off the ears, noses and other body-parts of wounded soldiers, now out of cowardice they no longer wish to fight. I say to the people: Anyone who delivers a captain will receive 1000 Mark, whoever delivers Samuel* will receive 5000 Mark.

The Herero people must however leave the land. If the populace does not do this I will force them with the Groot Rohr [Cannon]. Within the German borders every Herero, with or without a gun, with or without cattle, will be shot. I will no longer accept women and children, I will drive them back to their people or I will let them be shot at.

These are my words to the Herero people.

The great General of the mighty German Kaiser

Some historians have questioned the validity of this proclamation, and whether it was actually intended to be carried out, or whether it was just a tactic of psychological warfare. However, excerpts from von Trotha’s private journals confirm his desire to thoroughly destroy the Herero people.

“Now I have to ask myself how to end the war with the Hereros. The views of the Governor and also a few old Afrikaners (“alte Afrikaner”) on the one hand, and my views on the other, differ completely. The first wanted to negotiate for some time already and regard the Herero nation as necessary labour material for the future development of the country. I believe that the nation as such should be annihilated, or, if this was not possible by tactical measures, have to be expelled from the country by operative means and further detailed treatment. This will be possible if the waterholes from Grootfontein to Gobabis are occupied. The constant movement of our troops will enable us to find the small groups of the nation who have moved back westwards and destroy them gradually.” (Pool 1991: 272 – 273).
“My intimate knowledge of many central African tribes (Bantu and others) has everywhere convinced me of the necessity that the Negro does not respect treaties but only brutal force.” (Pool 1991: 274)
“… I find it most appropriate that the nation perishes instead of infecting our soldiers and diminishing their supplies of water and food.” (Pool 1991:274).

To read the entire text of Gewalt’s article, and see the proclamation in its original German, click here.

1840s: Germans (first missionaries, then settlers, then soldiers) begin arriving in South West Africa. The two main tribes are the Nama and the Herero, livestock farmers.

1880s: Germany makes South West Africa a colony. The military governor, Major Theodor Leutwein, knows nothing about Africa. He begins playing the Nama and Herero tribes off each other. White settlers continue to arrive and push tribesmen off their land with bribes and unreliable deals.

1889: The first German protective troops are sent to South West Africa in response to the Herero’s growing hostility. They are not meant for combat, but as a police force.

Late 1890s: A cattle-virus epidemic kills many of the tribe’s cows. The colonists offer the Herero aid on credit, and they amass huge debts.

1903: The Nama begin a rebellion led by Hendrik Witbooi and Jacob Morenga. Despite being greatly outnumbered, they use guerrilla tactics. They are joined by the Herero months later.

1904: The Herero rebel, attacking German outposts under the leadership of Samuel Maherero. The German Emperor replaces Major Leutwein with another commander, Lieutenant-General Lothar von Trotha, who had a reputation for brutally suppressing African resistance to German colonization in East Africa.

German troops begin slowly driving the Herero into a position where they are surrounded on three sides. The fourth side offers escape only into the Kalahari desert, where they poison the few water-holes.

1904-1907: The Herero are systematically killed by the German soldiers and by disease and starvation in the desert. Survivors are sent to labor camps, where many women are raped and forced to perform sexual services for soldiers. Many Herero people in the camps are also used as human subjects for lab experiments designed to prove the racial inferiority of black people.

The Nama are also put in camps at this point. It is estimated that 35-50% of their tribe is killed. 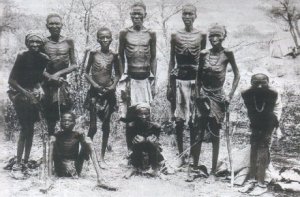 1907: von Trotha’s orders are cancelled in the face of criticism at home and abroad and he is recalled. It is too late for the Herero, however: before the uprising they numbered 80,000, and by 1907 only 15,000 remained.

Read the entire summary of events from the Peace Pledge Union or BBC News.

We Are Proud to Present a Presentation About the Herero of Namibia, Formerly Know as Southwest Africa, From the German Sudwestkafrika, Between the Years 1884-1915

A New England Premiere
by Jackie Sibblies Drury
at Company One Theatre
companyone.org